Time for a new book review! I know it’s been a long time, but I promise there are more to come soon! This time I had the pleasure of reviewing Invisible Ghosts by Robyn Schneider and oh my goodness I loved it! 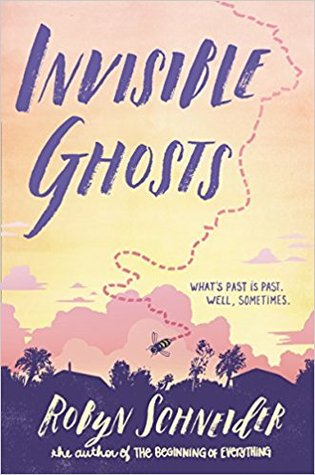 Invisible Ghosts tells the tale of Rose Asher who is struggling to find herself after the death of her brother, Logan, four years ago. She’s still able to see Logan as a ghost yet, she doesn’t seem to fit in at school. When her old friend, Jaime Aldridge, moves back into town and rejoins his and Rose’s old friend group, Rose is almost instantly reeled back to them. However, spending more time with her old friends also means not being able to hang out with Logan as much. Rose has to choose between the brother who swore to look after her even beyond the grave or the boy who makes her feel like her old self again.

I did sense a lot of character development from all three main characters. Out of the three, Rose did had the most development and Robyn Schneider did a great job of portraying the grief Rose felt. This novel focuses on the journey out of grief and proves to show that after all the bad times there will be a silver lining. It will be hard to let go of the past or someone who was very close to you, but in the end you have to let go at a certain point. The dead won’t be able to rest at peace until you gain closure and accept their death. I also really enjoyed the fact that Rose, Jaime, and their friends are the “theater nerds” and their family-like relationship. Despite the heavy theme Robyn is trying to portray, she still manages to make it uplifting and funny when necessary.

There were a small handful of things incorporated that I am not a fan of and this isn’t particularly Robyn’s fault – it’s more something I find recurring within the Young Adult Contemporary genre. For example, the lack of parents. Schneider makes it clear that Rose’s parents work a lot and that usually meant that Logan would watch over Rose. At the same time Rose makes it sound as if her parents are strict, yet I couldn’t relate. My parents are strict and would need a full detailed report of who my friends are, who I go out with, who their parents are, where are we going, for how long, who’s driving, are they safe drivers, and request to go out within 3-5 days prior to the event. As stereotypical as this sounds, we’re Mexican so my mom makes me clean in exchange for my absence.

In addition, it is said that Jaime has a secret that he keeps from Rose yet when it was announced it felt random and rushed. I found it quite comical honestly and I did laugh when I know it was to be taken seriously. In the end, the secret makes sense as to why it was put in the plot, but I feel like it could have been introduced sooner.

I would recommend this to those who like YA contemporary romance with supernatural elements and maybe even theater kids.

Thanks for tuning in. Until next time!